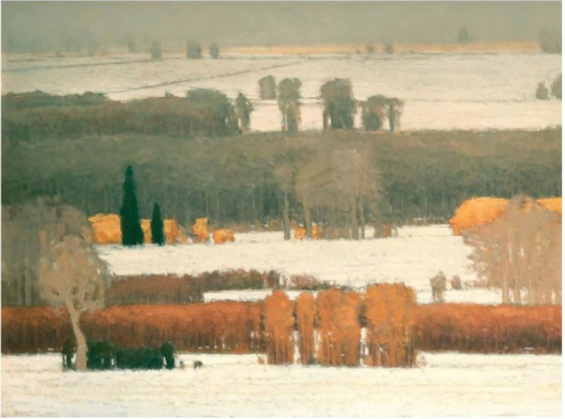 Many years ago when I was fairly unknown, those who did see my paintings mentioned that it reminded them of a painter named Russell Chatham. This is back before the internet days and I had no idea who this guy was, or why anyone thought to compare us. I spent my early years trying NOT to paint like Andrew Wyeth, to find my own voice, only to be told I sounded like this other guy.

Someone told me he had a book out, and after failing to find it at the library I went down to Elliot Bay Book Store in Seattle since they had a reputation for having or finding any book. The fellow at Elliot’s told me they had no books by or of Russell’s work, but he was represented just downtown at a gallery called Kimzey Miller. He thought they might know more.

So I walked uptown from Elliot’s and found Kimzey Miller Gallery, which happened to be having a showing of Russell’s work, and they had a few of the books “One Hundred Paintings”. While I was there I walked around and looked at Chatham’s paintings and did not see the connection, but you do not get to control others impressions and the comparisons, whether warranted or not, and they kept coming… including a reference in a large article done about my work in Southwest Art Magazine later.

Russell was by then a seasoned and well loved tonalist, and his paintings were far beyond my abilities and skillset. They simply glowed… Over time, the best explanation of this comparison came from another painter and friend, Kent Lovelace, a lifelong friend of Russell’s and instrumental in the production of his early lithographs. Kent thought that we “looked at the same things”. I can agree with that, and later realized that Kent belonged in that same assessment. We were all painting the same places, responding to the same things. California, Washington, western mountain states.

As I purchased a copy I was chatting with them about why I was looking for the book, and Terry Miller found that interesting enough to ask for a studio visit. That visit led to my representation by the gallery, my first one-man major show, and a several year relationship with them. So now my paintings were hanging next to Chatham’s at KMG and there was, to my eye, no viable comparison to be made. Not that it is necessarily a bad thing, just not what you want when you are trying to develop your own voice.

Though not directly influenced by Russell’s work (at least consciously), his impact on my life and career turned out to be weighty. I was later represented by three other galleries that also represented Chatham’s work, in Wyoming, Montana, and New Mexico. Although I still see no resemblance, I cannot help but feel grateful for the association.

The last time I saw or spoke to Russell Chatham was 2002 when I shared billing with him and Kent in the last show Geoff Sutton did at his gallery Sutton West in Missoula, Montana. Russell was out of sorts that night and went home early after the post-show dinner. He was entering a phase of his career that was upended by financial and personal misfortunes that we were not aware of at the time. I did try to contact him (a best regards) later through a mutual writer friend who was going to meet him in California, but she was not successful locating him. He had returned to his early origins on the West Coast and was staying out of sight. Even Kent could not get ahold of him. (It is true that if you were female, you had a better chance…)

So, in the 2002 show card I am posting here, I find myself standing with two phenomenal painters, two of which have left us for the Orion Belt, and I must say, it feels sort of lonely to be the only survivor on the card. 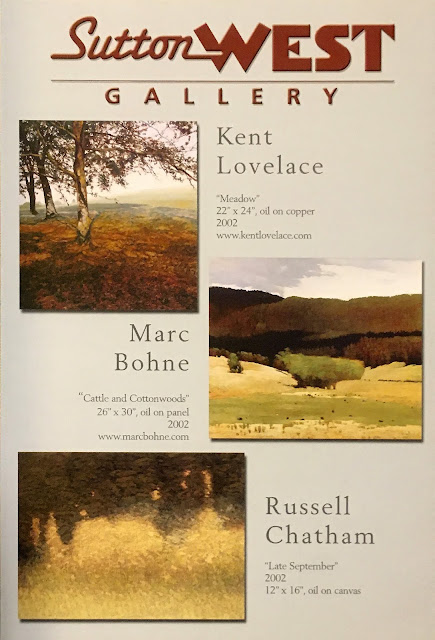