Varnish is a tough topic. Some do, some dont. But if you want your work to last, and colors to not fade, and dirt not to be part of your legacy, you better varnish.

A good varnish protects the surface from dirt and grime. It also protects the paint pigments from the destructive power of ultraviolet light. Both these forces are entropic, and do their job over time.

Varnish also brings dull paint out and brings the color to life. It unifies various surfaces, and clarifies.

Another thing varnish does is protect the surface from various mishaps, like scratches.

There are many, I personally use two, Golden's and Utrecht spray. Both are UV blockers, both are gloss. Gloss is preferred because the stuff used to make things non-gloss tend to fog the surface, and dull the paint. Gloss is also easy to clean. Both are also removable and repairable. All varnishes age and yellow, and being able to remove them and redo them over time is a big deal. It is also handy when a repair is needed. Do this long enough and you will need both. The varnishes I use can be removed and the paint underneath undisturbed.

The Golden is fairly thick, and I dilute it with clean non-oderless mineral spirits to a workable finish. Varnish requires that a painting surface be completely dry or cured before application. Otherwise, you may simply preserve the undry state underneath the varnish indefinitely. Varnish needs to be applied in a clean space as well, no chance of settling dust or particulate falling from an old ceiling as application is best done on a flat surface face up. Until a varnish 'sets' it may sag if the painting surface is vertical. Until it sets, it needs to be protected.

My observation with paintings is they go through a couple three stages of finishing. There is that point when they tell you they are finished, and that is a satisfying moment. They they get cleaned and varnished, and become a new thing. Then they get lit and viewed, which may include frame or not. That is when they come to life, if they are going to.

A quick note about framing. I think of it as a tool, the primary purpose of which is to cause the viewer to consider what is inside the frame more seriously. It separates the conversation from the surrounding noise, and causes you to see it separately. It intensifies concentration. I like them simple, unadorned, and neutral.
Posted by Marc Bohne at 8:49 AM No comments:

I am going to side track for one episode, slightly into the personal. It relates to my painting insofar as it is part of the observe and comment part of daily life that good painting is all about.

Our friend and neighbor E.F. Norwood passed away last week, after a several year decline. Didn't quite get to 90. I got to know him maybe 10 years ago, and had kept up with him since. He was an interesting character, a real gentleman. Impeccable taste, low tolerance for idiocy and mean people, and had at least a couple rabid hobbies; film and Dahlias. He had an incredible Dahlia garden and was revered throughout our area. He had books on film, and could talk for hours on movies. He retired after many years teaching high school, and MANY of his old students became friends for life. He was an incredibly private and thoughtful person. And he loved martinis.

He was also a gay man who never spoke of it or felt it was anyone's business, which it was not. I got to go through his personal things when we moved him out of his home into a senior center place, and realized that he had lived his life in a world of incredible hostility to who he was and still managed to come into old age with a great spirit, and community sensibility. He was born and raised in Arkansas, went to a Christian college in Missouri, and did a tour in the Navy, all at a time when there were few things worse than being gay, a fact that could get you arrested, beaten, or killed at the first sign of any expression of it or knowledge. His scrap books were mixed photos and clippings of his friends, his Navy days, and newspaper clippings of some of the horrible things people did to gay men when they found out. So I get it. He was private, but maybe a bit terrified. The risk was always there. From losing friends, to even losing your life.

I am a white straight man. I have been given a pass on the privilege front. I do not know what it feels like to be in danger simply because of who I am. I am also fortunate to have been around artists all my life, and have never thought of gay people as any different than anyone else. But I am being forced to see it affecting the lives of those who live under the constant suppression of their human rights by both the LGBTQ and BLM communities pushing themselves into the discussion and larger cultural stage. And it is astonishing. I even see my own biases in subtle ways now that I did not fully own before. And that, I think, is where it has to start.

E.F. was embarrassed by his full name. Never told anyone. I know it, but will not tell. He was religious only in the way that how you behave everyday is your true religion. He did not believe in any god that taught hate. I miss the martinis, and the Dahlias, the Sunday get togethers, our steak and potatoes dinners, and his booming voice. He has joined Einstein and Churchill, Ghandi and Freddie Mercury, and all of his favorite movie stars wherever they all went, and his little dog. He was ready. As I write this I think that I was not. 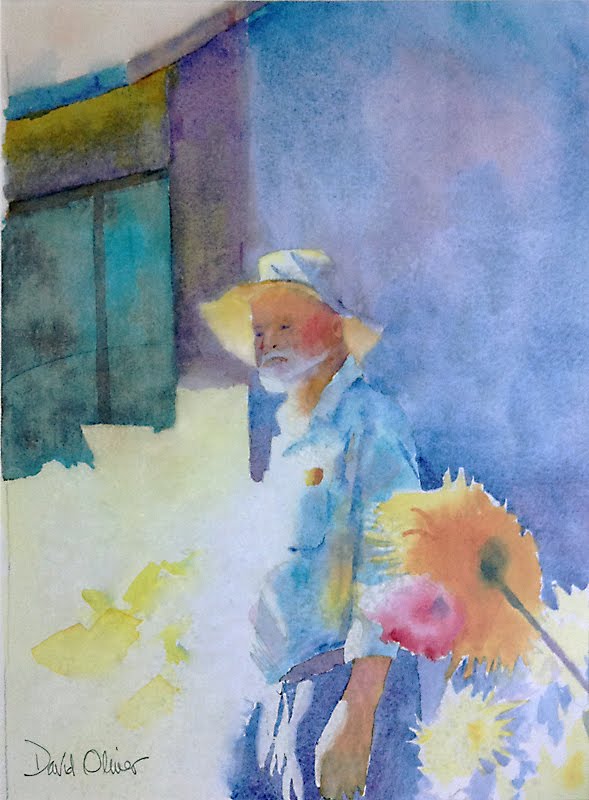 This little watercolor was done by his friend David Oliver. It is not a portrait of E.F., it IS E.F.
Posted by Marc Bohne at 10:03 AM 6 comments: