At least a sigh of relief...

I don't care what anyone thinks about politics or policies, or nationalism, or much else for that matter. But I do care about dying in an asylum. I am lost now, in the land I was born in, no longer feeling like home.

Watching neighbors, and people I know believing in and parroting completely made up nonsense and worshipping the most ridiculous characters imaginable, while expressing a piety to a "savior" that would admonish them if in their presence has been the most bizarre phenomenon of my lifetime. Up is down, in is out, bad is good. What used to be decent people in the U.S. have gone completely off the rails, and it is dumbfounding. If you are one of them, and believe that a tawdry game show host is the second coming and the Clintons are running an international pedophile ring, don't come here anymore. If you insist on stolen elections and seditious insurrection, stay away. If you honestly think Jesus would support any of this, stay far away.

I used to travel the back roads of the country all the time. I met many people in rural areas and enjoyed my time with them in the decades I did that. But the last ten to fifteen years something began to change. People I used to trust began to look at me suspiciously, and I slowly began to start backing away from them. Now I am flat out afraid of them. It is like a movie, where a virus turns people into zombies... there is a misplaced anger, and a toxic aura about them and the environment they inhabit. It is heartbreaking being unable to trust your neighbor to call the fire department if your house is burning.

So don't come back here. Dont write comments, don't admonish. Just leave. Go be nuts somewhere else. If I lose a couple friends, I am ok with that. My hourglass worth of sand is on the wane, and I do not have time left to spend on things that do not matter, or people that have lost their minds.

The cancer of Trumpism is here now, and will continue to erode the fiber of whatever was good about America, but for a while now we get to sit on the curb, be exhausted, wipe the brow and take a breath.

What does this have to do with art or painting? Everything. The spark of creativity is fanned best by quiet, not fear and apprehension. And for four years now, each and every day saw the dismantling of every pillar of reality I trusted by a band of pirates... my first out and out mentally-ill grifter president. And the following... the con man relies on participation of his marks to succeed. I thought we were better than that.  The level of wrong I was has been incapacitating at times. The painting mind was full of smoke and ashes.

Though I know there are fires still burning everywhere, watching the exit of this band of pirates has brought the first glimmer of quiet... the first feelings of rest.

I hope it continues. 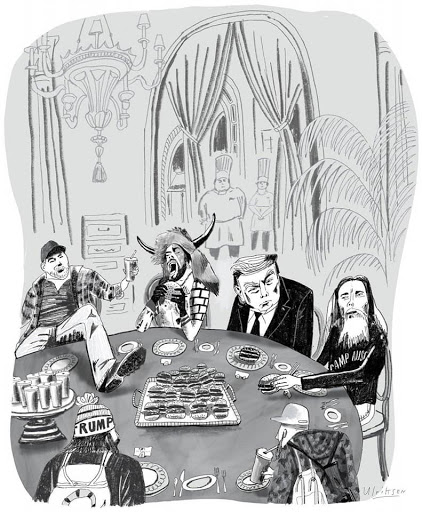